As before, I’m using the poll data from the Pollster API, combining the results and weighting by age to create a super-poll. Then I’m running 10,000 simulations using the results of the super-poll to figure out how likely each candidate is to win.

The code for this version is in a Jupyter notebook on GitHub, so you can play with it if you want to pretend Jill Stein matters or something.

Now to the results! Using the super-poll results since July, the race has looked like this: 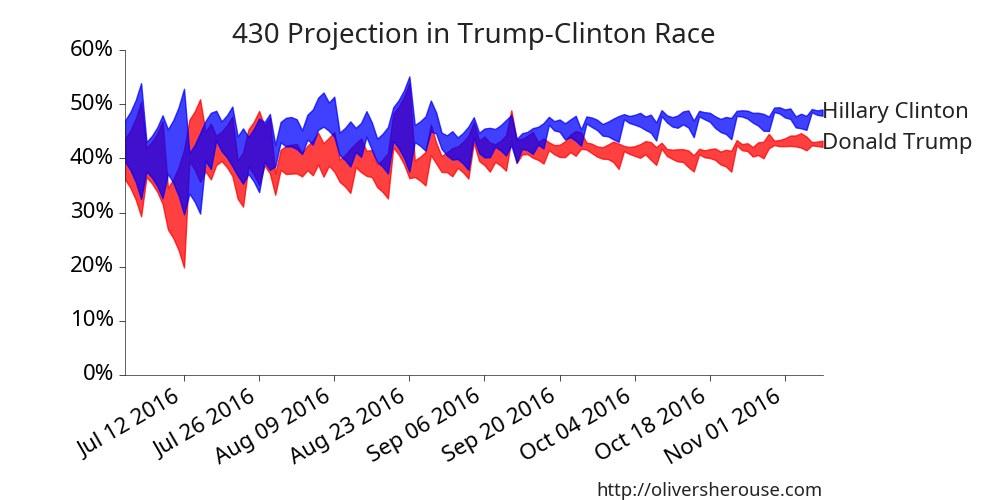 Those lines are the 95% confidence bands. The story here is that, while things were pretty uncertain early in the race, Clinton began to separate after the first debate in September, and Trump has never been able to catch up. The recent revelations about the emails, for all the sturm und drang they caused, don’t really show up here. She’s just ahead. How ahead? This ahead:

Well, she’s not over fifty. But five and a half points is a pretty solid lead with as many polls as we’ve had. In 10,000 trial simulations, she won every single one. That’s as comfortable as you get.

So, any caution? If, as many suspect, there’s a weird Trumpian version of the Bradley Effect, then he has a better chance than the model projects, which is none. But with 0.2 percentage points standard error, he needs to get to swing better than two and a half points if he’s drawing them all from Clinton, and More if he’s getting them from the “Other” category. In the best case, that’s one secret supporter to every public one. That’s a tough road to hoe.

My gut says no. Clinton’s got this one.