Just before the Iowa Caucuses, I showed how you can make a 80-percent-of-the-way there poll-based election forecasting system with surprisingly little work. I called it the 430 Model, because 430 is about 80 percent of 538, and I was ripping off Nate Silver. My model did OK on the Democratic side, though (like the polls) it was off on the Republican side; Trump’s support was overstated, or rather the opposition to Trump was understated.

But, since people have been interested, I’ve updated the model a bit and made forecasts for New Hampshire! I’ve simplified the weighting decay function to halve the weighted sample size for a poll each day1. I’ve also added limited my results to polls with likely voter screens, and set the window of polls included in the super-poll by number instead of by date. You can download and play around with the new model as a Jupyter notebook here.

This is what the New Hampshire race has looked like over the last three weeks on the GOP side, when polling has happened pretty steadily:

The picture’s been pretty stable the whole time. There’s three tiers: the down-and-outs (Christie, Fiorina, Carson), the hope-for-seconds (Rubio, Kasich, Cruz, Bush), and Trump. The superpoll results bear that out:

Rubio’s bump has gotten him to the top of the second tier, but realistically those guys are all tied, and each of them (except Cruz) really, really wants a second place finish. First place seems utterly out of reach for all of them; in my 10,000-trial simulation, Trump won every single time.

On the Democratic side, things seem equally fatalistic: 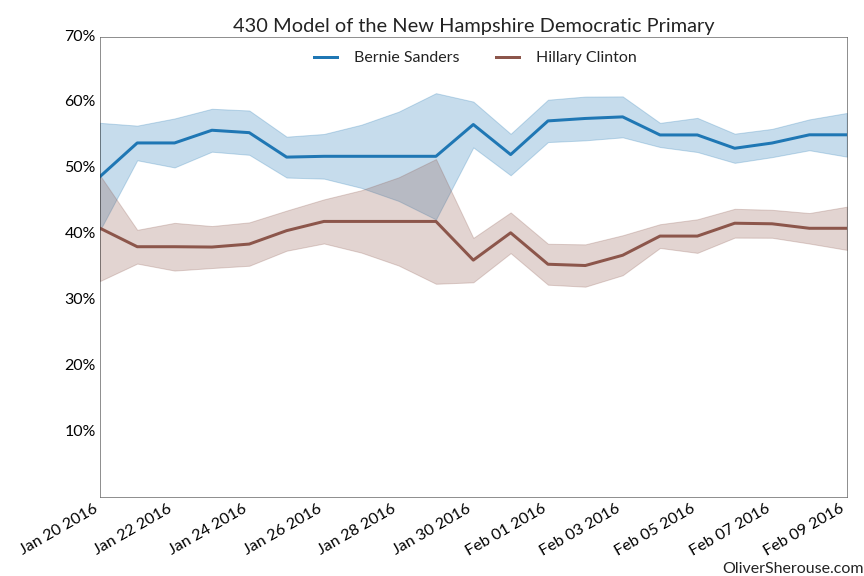 Not even a story there. Bernie Sanders is winning. So also says the superpoll:

As Trump did on the GOP side, Sanders wins every time in a 10,000-trial simulation.

Polls have historically been bad in New Hampshire. These projections are a great summary of what the polls are telling us, but if the polls are consistently off by a significant amount, we could still get some real surprises. If I were Sanders or (especially) Trump, I would actually wish my numbers were a little worse; in both cases, not dominating is going to look like a loss. It’s entirely possible that one of those second-tier GOP candidates is really going to break out, though I have no idea who it would be or why.

Or maybe they’ve finally learned how to poll New Hampshire and this is all effectively a done deal. We’ll find out tonight!